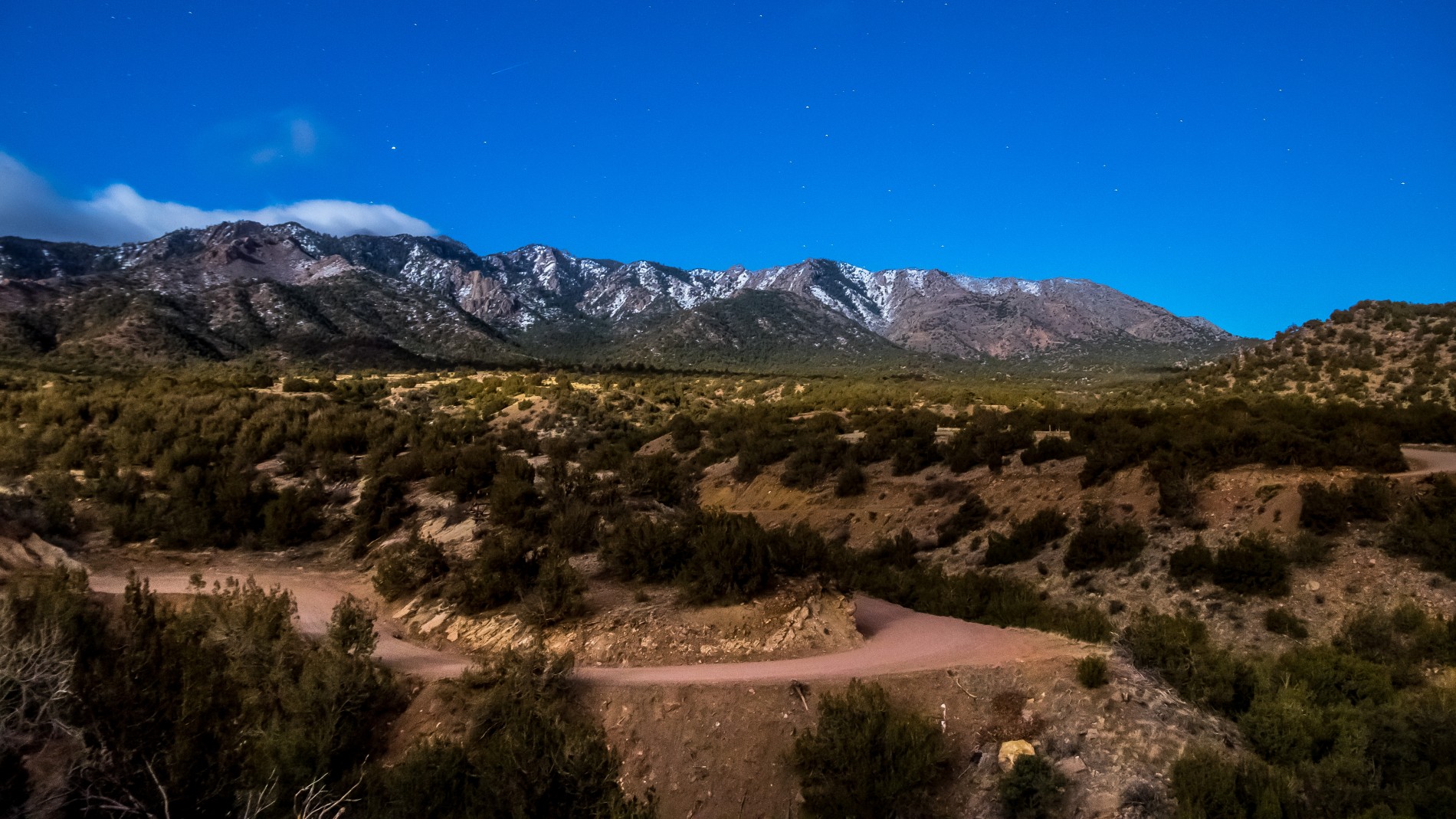 Prior to the Louisiana Purchase in 1803, the Arkansas River and the area that is now Fremont County and Colorado had seen Ute and other Native Tribes, French, and Spanish; but no systematic exploration or good maps had been made. The southern boundary of The Louisiana Purchase was not specified, although a portion of the Red River seems to have been assumed. There were several causes of confusion in distant Capitols, where such things were negotiated:

Not until 1821, when the Adams-Onis Treaty was negotiated by US Secretary of State, John Quincy Adams, and the Spanish Minister to the U.S., Don Luis de Onís, would the international boundary be clearly drawn. Signed in February 1819 and ratified by the U.S. Senate and President Monroe in 1821, the Adams-Onis Treaty established the Arkansas River through Fremont County as part of the boundary between the United States and Spanish territory. Land to the north of the river was the territory of the United States and land to the south was agreed to be Spanish territory.

Further complications from the boundary included Mexico’s struggle for independence and claims of the Republic of Texas. Control of land to the south of the river would not be resolved until Mexico agreed to the Treaty of Guadalupe Hidalgo, which ended the Mexican-American War in 1849, and the Compromise of 1850, which was enacted by Congress to settle Texas claims to the area. Since 1850, both sides of the Arkansas River through Fremont County have been part of the United States. A 2014 project known as Delimitations traces the 1821 border with 47 obelisk-shaped monuments made of galvanized steel, two of which are in Fremont County—in Cotopaxi and on Riverside Drive west of 1st Street in Cañon City.

After the Louisiana Purchase, the U.S. was anxious to survey and determine the boundaries of its new lands. In 1806, General James Wilkinson sent Lt. Zebulon Pike to explore the headwaters of the Arkansas River, then proceed south, locate the source of the Red River, and follow it to the Mississippi. Volumes have been written about General Wilkinson and his complicated relationship with Spain, some of which played out in Pike’s expedition.

On November 11, 1806, Pike and the 15 men in his expedition camped near what is now Holly in eastern Colorado. They were following the Arkansas River as well as tracing the route of a column of Spanish troops under the leadership of Lt. Facundo Melgares. Melgares was returning to Santa Fe after visiting a Pawnee village just prior to Pike’s arrival in the village and escorting several Osage travelers back to their home from St. Louis. Despite lacking the clothing, equipment, or supplies needed for a winter expedition, Pike continued westward and sighted the mountain that would bear his name on November 15th; camping near what is now Pueblo on November 23rd.

The Pike Expedition reached what is now Cañon City on December 5th, after spending several days unsuccessfully trying to climb what is now Pikes Peak in waist-deep snow. On December 10th, the group left the Arkansas River near Cañon City and headed up Four-Mile Creek in an attempt to follow the Spanish trace. Pike then traveled through South Park, reaching the South Platte River (which he correctly identified) on December 14th. After which, he traversed Trout Creek Pass back to the Arkansas River (which he incorrectly thought to be the sought-after Red River) on December 18th, which he spent several days exploring.

Christmas Day north of Salida was spent drying meat. The expedition then headed east, arriving back at their Cañon City camp on January 5th after an arduous 10-day journey along the Arkansas River and through the Royal Gorge. Pike notes in his journal that he was mortified when he realized he was back at the camp they had left a month before! The men were battered by the journey, equipment was damaged, several horses were lost, and, to top it off, it was his birthday! A blockhouse was constructed for shelter near what is now the southwest corner of the State Prison property while Pike regrouped his men so they could recover from their difficult journey. He spent time at the camp in Cañon City, deciding what to do next, and concluded he would leave excess baggage and two men who were in no condition to travel at the camp and proceed on foot overland to find the elusive Red River.

On January 14th, the expedition left the Arkansas River, proceeding on foot and carrying about 70 pounds of pack and provisions up Grape Creek, across the Wet Mountain Valley, and over Medano Pass. On January 30th, they encountered the Rio Grande (which Pike thought was the Red River). They constructed a stockade at the Conejos River and the Rio Grande about 4 miles below what is now Alamosa and began gathering up 9 of the men that had succumbed to frostbite and the difficulties of the winter journey. On February 26th, Spanish soldiers arrived, informing Pike that he was in Spanish territory. They politely placed him in custody, assisted in gathering up the rest of the expedition, and escorted the group to Santa Fe. The men would later be escorted to Chihuahua, Mexico, and return to the U.S. on July 1, 1807.

After their return by Spanish authorities, Pike’s published maps and journals helped promote an understanding of trade opportunities and the strategic importance of Santa Fe. He also mapped the headwaters of Arkansas and the Platte. It wasn’t until 1820 that any further systematic exploration of the region would occur.

Major Stephen H. Long had been authorized by President James Monroe to conduct a scientific expedition of a portion of the Louisiana Purchase in 1818. He was assigned to go to the source of the Platte River and then by way of the Arkansas and Red Rivers to the Mississippi. On June 6, 1820, Major Long, Dr. Edwin James, Captain John R. Bell, and the rest of the expedition left Ft. Lisa, Nebraska near the junction of the Platte and Missouri, and followed the Platte River into what is now Colorado.

On June 30th, Long’s expedition sighted the Rockies, and on July 14th, Dr. James, with a few others, ascended what is now Pikes Peak. On July 17th, some of the group camped near Cañon City by the springs where Pike’s blockhouse would have been at the southwest corner of the State Prison grounds and named the location “Bell’s Springs.” On July 24th, near Rocky Ford, the expedition divided into two groups with Bell descending the Arkansas River and Long, accompanied by Dr. James and eight others, heading south into Spanish Territory in search of the Red River. On July 30th, thinking they had found the Red River, Long’s group descended what was actually the Canadian River to its junction with the Arkansas River, which they reached on September 10th.

Long realized his error with disappointment and chagrin. But, due to the exhaustion of the men, the near-starvation of the horses, and the lateness of the season, he continued down Arkansas. On September 13th, he was reunited with Bell’s group, which had arrived on September 9th. The expedition had been plagued from the beginning by its lack of supplies. Sweltering heat and difficulty in finding food and water added to hardships that cut the exploration short. Recent studies have determined that the region was suffering the effects of an extended drought, which helps explain the harsh conditions faced by the expedition.

Long’s expedition was significant. Since John Quincy Adams had just concluded the treaty with Spain, which drew a new U.S. border to the Pacific, including a portion along the Arkansas River, President Monroe decided that exploring the Rocky Mountains and the border with the Spanish colonies was vital to the nation’s interest. While the maps and scientific reports from the mission were important, Major Long’s characterization of the area as the “Great American Desert”  would stick and lead to the region being bypassed by settlers for the next few decades.

John C Fremont’s 3rd expedition in 1845 was the next officially sponsored foray into southeastern Colorado under President James Polk. Fremont was married to Jessie, the daughter of Missouri Senator Thomas Hart Benton, who gave a strong voice to the notion of Manifest Destiny regarding the continental scope of the United States. In 1842 and 1843, he had explored the northern Rocky Mountains, guided by Kit Carson. The 3rd expedition left Bent’s fort guided by Kit Carson on August 16, 1845, and on August 26th, the expedition camped at the mouth of the Royal Gorge, then headed up Grape Creek, toward the Great Salt Lake, and into California.

Fremont’s 4th expedition in 1848 was made as a private citizen in search of a transcontinental railroad route for his father-in-law. Led in the winter by Old Bill Williams, it proved disastrous with 11 men dead. Leaving Bent’s Fort in November, the group headed up Hardscrabble Creek, over the Sangre de Cristo Mountains, through the Rio Grande Valley, and into the San Juan Mountains, where Williams took a wrong turn. Fremont and a small group made it safely to Taos, but it was the largest loss of life in Rockies exploration. Fremont’s 5th expedition for a railroad route in 1853-54 followed a similar route but successfully found its way across the San Juans via Cochetope Pass, largely retracing the route of Captain John Gunnison.

Fremont’s descriptions of the west, written with his wife Jessie and aided by maps from cartographer Charles Preuss, would popularize the west and lead to increased interest in the area. His writings became a guide that encouraged western settlement because they did not reflect the harsher assessments of Pike and Long. His prominence and wide-ranging western travels have led to his name being affixed to many places, schools, and geographic features in the west—including Fremont County, Colorado.