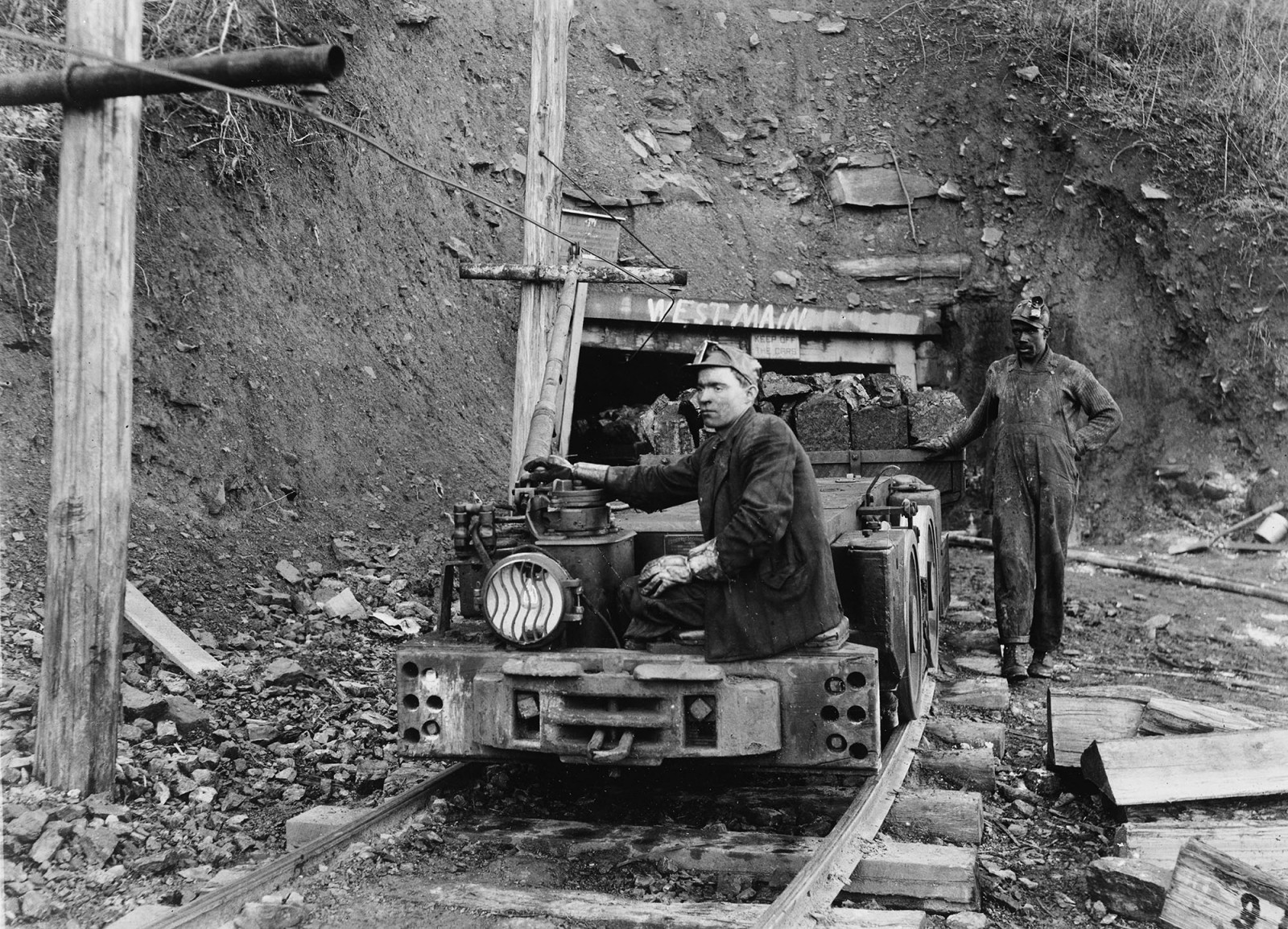 Rockvale and Coal Creek are two of the original coal camps of Fremont County. Other coal mining towns still alive are Williamsburg, Prospect Heights, Brookside, and Brewster. Other towns, gone but not forgotten, were Chandler, Nushaft, Emerald, Radiant, Bear Gulch, and Fremont.

Jesse Frazer first discovered and claimed an outcropping of coal on the hillside north of Coal Creek in 1860. He sold the coal mainly to blacksmiths in Cañon City. The first claim was staked by Frazer, Hoopingarner, Harrington, and Lelan and sold to J.I. Musser in 1867, who then sold it to the Colorado Coal and Iron Company, the forerunner to Colorado Fuel and Iron. Allen and Canfield 1opened a mine in the southern end of Coal Creek in 1871. By the time this mine played out, the Nushaft mine had opened. Miners could travel underground between the Coal Creek mine, Canfield mine, Nushaft mine, and Rockvale mine by a tunnel.

The mines of Coal Creek were opened in 1872 with 100 miners producing 400 tons a day. At its peak, Coal Creek had 16 saloons, two drug stores, two hotels, several grocery stores (including the Colorado Supply Company store), several millinery shops, a lumber yard, a notions store, an undertaking parlor, a hardware store, two livery stables, a macaroni factory, schools, a theater, two race tracks, a baseball park, and a railroad depot. The Hawkeye was the camp’s newspaper, and while men of all ethnic groups worked together during the day, at the end of the day, that ended. Consequently, there was Scotch town, Little Italy, and others.

Coal Creek was incorporated on Jan. 10, 1882, and was first platted on Nov. 21, 1887.  The town was never a closed camp and had privately-owned stores and houses. In a closed camp, you had to live in company housing and only had company stores. An open camp wasn’t owned by the mining company. You could build your own housing and shop in any store.  The miners were paid in spendable money, whereas a closed camp was paid in scrip, only useable in the company’s stores. Unlike Coal Creek, Chandler only had company housing, school, and store.

The town of Rockvale was homesteaded by William Horace May in 1863 (May cabin pictured on the left). He arrived in Fremont County from Vermont and first farmed in the Beaver Creek area. After getting flooded out twice, he moved to higher ground and settled in what is now Rockvale. Colonel May built a cabin on the banks of Oak Creek, where he used his land for grazing. To water his crops, he dug a ditch on the southeastern side of town from Oak Creek without realizing there were millions of tons of coal underneath the soil. Eventually, small outcroppings of coal were found and mining on a small scale continued until 1880 when the property was leased to the Canon City Coal Company.

On July 10, 1882, William H. May and W.D. Thatcher filed with Fremont County Clerk and Recorder for incorporation, and Rockvale became an incorporated town Sept. 11, 1886.  Mr. May built a building and became the postmaster. He also had a drug store and barber shop in the building. One hundred and twenty-five years later, the post office is still in the same building.

The mine was acquired by Colorado Fuel and Iron Corporation in 1896 and operated until 1927. It was dismantled, but one can still see the ash dump and railroad tracks. Rockvale was never a closed camp. It had privately-owned stores and houses. There was the CFI store and meat store, but you could shop at any store. The mine did have buildings built for single men to rent and a bathhouse for the miners. The mine employed 300 men and produced 1,200 tons a day, requiring the Sante Fe Railroad to pull two trainloads per day. At its peak, Rockvale had 1500 residents.

Rockvale and Coal Creek were made up of many nationalities. According to the nationality numbers recorded in 1923, there were 258 Italian workers, 199 who were classified as American, 48 Austrian, 20 Welch, 18 Mexican, and 1 Chinese among the 643 workers employed in Fremont County mines.  In the evenings, teachers taught the men and women how to speak English at the YMCA. The YMCA was also used as a hospital in 1921 during the flu epidemic. Dr. Williamson took it over as a hospital and used the women of the town as nursing assistants. A nurse came from the Pueblo hospital to help, and the ladies of the town cooked and served meals to the ill. Rockvale had the fewest number of deaths from the flu of all the coal camps, losing only 40 of the 900 cases.

The only known tipple left standing from all 70 mines is the one behind the Fawn Hallow. All the other mines have been closed and sealed. Many old ash dumps can be seen around the county. Houses from the coal camps can be seen around the county. For example, the Moschetti store on Chestnut Street in Cañon City came from Radiant. Many homes from Chandler can be seen in Cañon City’s Prospect Heights area and other older streets in the city. The house at the Union Highland Cemetery and another at Fawn Hallow was moved from Emerald. Most homes owned by the mining companies had a kitchen, a living room, and two bedrooms.

It was not uncommon for the young boys to go to work with their fathers, or worse yet, without their fathers because they’d died in mine accidents. Many boys began their mining careers at 8 years old by picking rock out of the mine cars their fathers had loaded (miners did not get paid for the day’s work if there were rocks in the cars).

Radiant was a Victor American Fuel Company mine later known as Pyrolite, and then as Kenmore. Opened in 1903, three miles south of Coal Creek, it was the last of the company camps in Fremont County. At its peak, 125 men were employed at the mine, which produced an average of 800 tons of coal a day. The Santa Fe Railroad made daily trips to Radiant and Rockvale to load the coal, which was then shipped to various states.

In 1929, during the depression days, the Radiant mine was closed, though a number of houses remained standing. The Federal Emergency Relief Administration (FERA) leased the camp in an effort to house the many transients roaming the country. People were free to leave, but if they stayed, they were required to go to school, fight forest fires, build roads and fences, or take up whatever other work was needed. By 1937, when the economy improved, the staff was discharged and the camp closed.  The buildings were sold at auction and moved to other Fremont County towns.  The company store was donated to the American Legion and became the American Legion Hall in Florence.

In Chandler, everything belonged to the mining company, and miners paid about $4.00 a month for rent.

The following is taken from “Brookside Centennial” by Sue Cochran.

In May of 1913, fifty men and women who were residents at the time voted to cause the Town of Brookside to become an incorporated place… Newspapers reported that the election was held at the one-story, brick store building, known as the Colorado Supply Company’s Store, at or near the corner of Main and Second Streets.’

Although newly incorporated in 1913, the village of Brookside had already been a thriving coal community for about 25 years.

Early pioneers in the area found coal outcroppings along a little creek coming out of the hills to the south of the Arkansas River.

Coal was in demand at the time. Railroaders looking for fuel to power their trains heard about the coal, bought up the land, and opened a mine.

A community soon sprang up around the mine so that the coal miners would have a place to live. They called the mine and the collection of homes Brookside because it was beside Spring Creek.

During the time that Brookside was a CF&I company, miners were provided with educational opportunities and many other services by the company.